Rivalries amongst automotive manufacturers began the moment the second horseless carriage hit the road, and they have only heated up since. Especially here in the United States, car companies have gone head-to-head for over a century to gain consumer confidence and sell vehicles.

Two of the biggest names in the business, Ford and Dodge, have battled each other on roadways, job sites, and race tracks for years. They have developed a brand loyalty that is rarely matched, and this is especially true when it comes to trucks. Henry Ford’s first purpose-built truck arrived over one hundred years ago in 1917, and the Dodge brothers’ version of a truck arrived a few short years later.

For many decades trucks were only viewed as work vehicles used on farms or in industrial settings. During and after the Second World War, many Americans were exposed to vehicles like the iconic Jeeps that were being produced by Ford (and other manufacturers) and the Power Wagons produced by Dodge, plus many other utilitarian vehicles capable of transporting heavy loads across rugged landscapes. America’s love for the truck started to grow.

History of the Ford Powerstroke and Dodge Cummins

The first Ford diesel trucks to feature an engine with the Powerstroke name arrived in 1994. Ford’s previous diesel engines had been designed and built by Navistar, previously known as International Harvester, and had lots of experience with diesel engines, trucks, and heavy machinery. The partnership between Ford and Navistar had been a successful one, so when Ford needed a replacement for its 7.3 IDI V8 diesel, they again turned to Navistar. The Navistar T444E, or Powerstroke 7.3 as it is known in Ford Applications, was a success from day one and was just the first in a long line of powerful engines to feature the Powerstroke name.

Dodge trucks have used Cummins engines to power their diesel trucks and have utilized the Cummins B Series engine since 1989. Cummins has been in business since 1919, and just like Navistar, they have tons of experience with diesel engines and heavy machinery so they were a natural fit for Dodge’s work trucks. Known as the “12 Valve”, the original 5.9 Cummins was a popular alternative to the V8 gasoline engines that Dodge had previously been using and is still regarded as one of the best truck engines of all time. 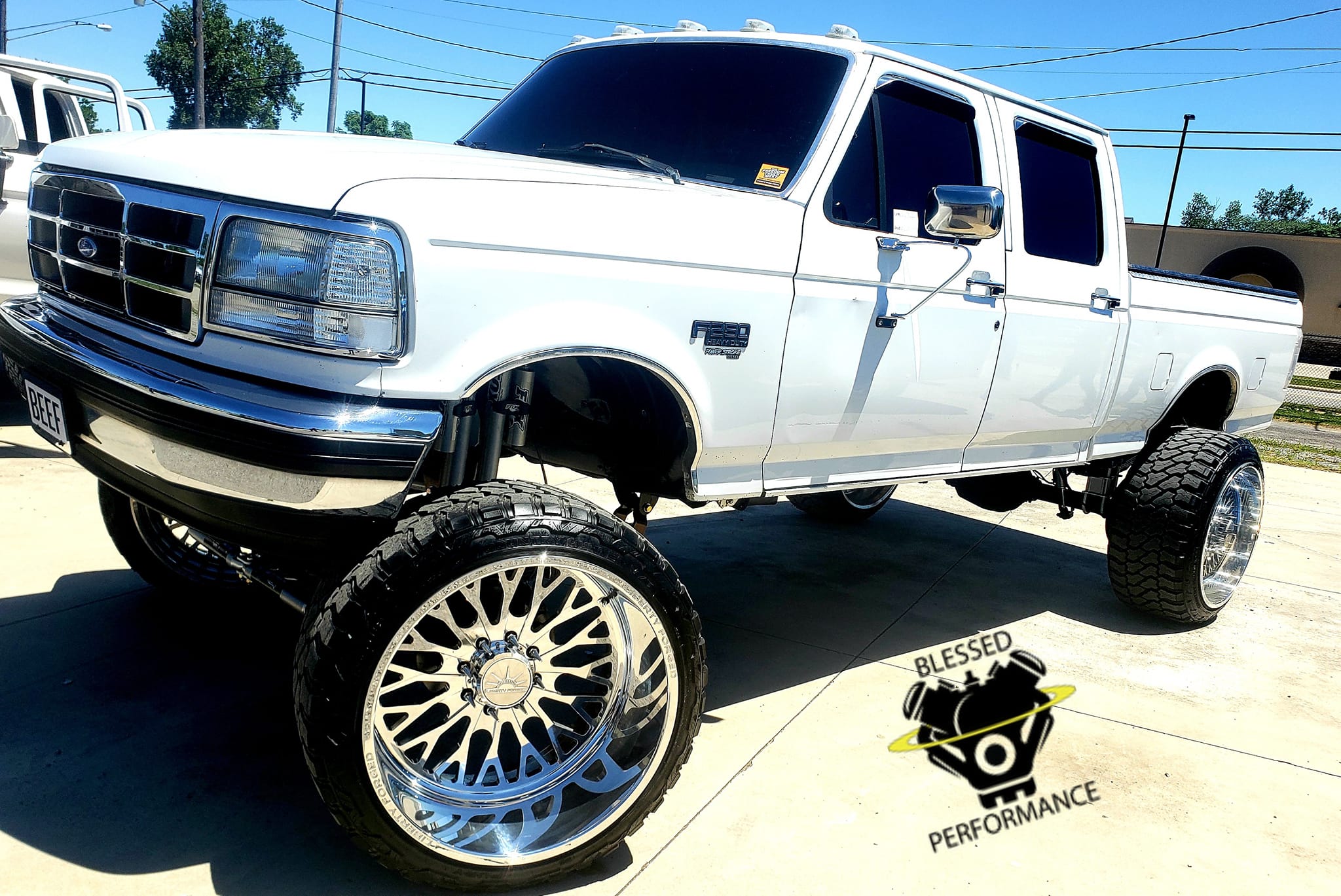 The 7.3 Powerstroke maintained the same V8 configuration and 444 cubic-inch displacement as the previous Ford diesel power plant, but the Powerstroke was a completely new design when it went into production in 1994. It originally featured electronically controlled injection with a camshaft-driven fuel pump that was later changed to an electric pump, and several other changes were made during the 7.3’s production run to increase power and reliability.

A single Garret turbo, initially without a wastegate or intercooler, helped achieve an initial 250 horsepower and 505 ft-lbs of torque, but as the engine was developed, these numbers started to grow right up until it went out of production in 2003. Other improvements over this lifespan included split-shot injectors, powdered metal connecting rods, and emissions equipment such as a catalytic converter.

Over a million 7.3 Powerstroke engines were produced and built in the USA. Ford only switched to the next generation 6.0 due to noise regulations imposed by certain states, which would have required significant changes. The 7.3 rightly deserves its status as one of the best diesel engines of all time and is the reason why the name Powerstroke holds so much weight today. 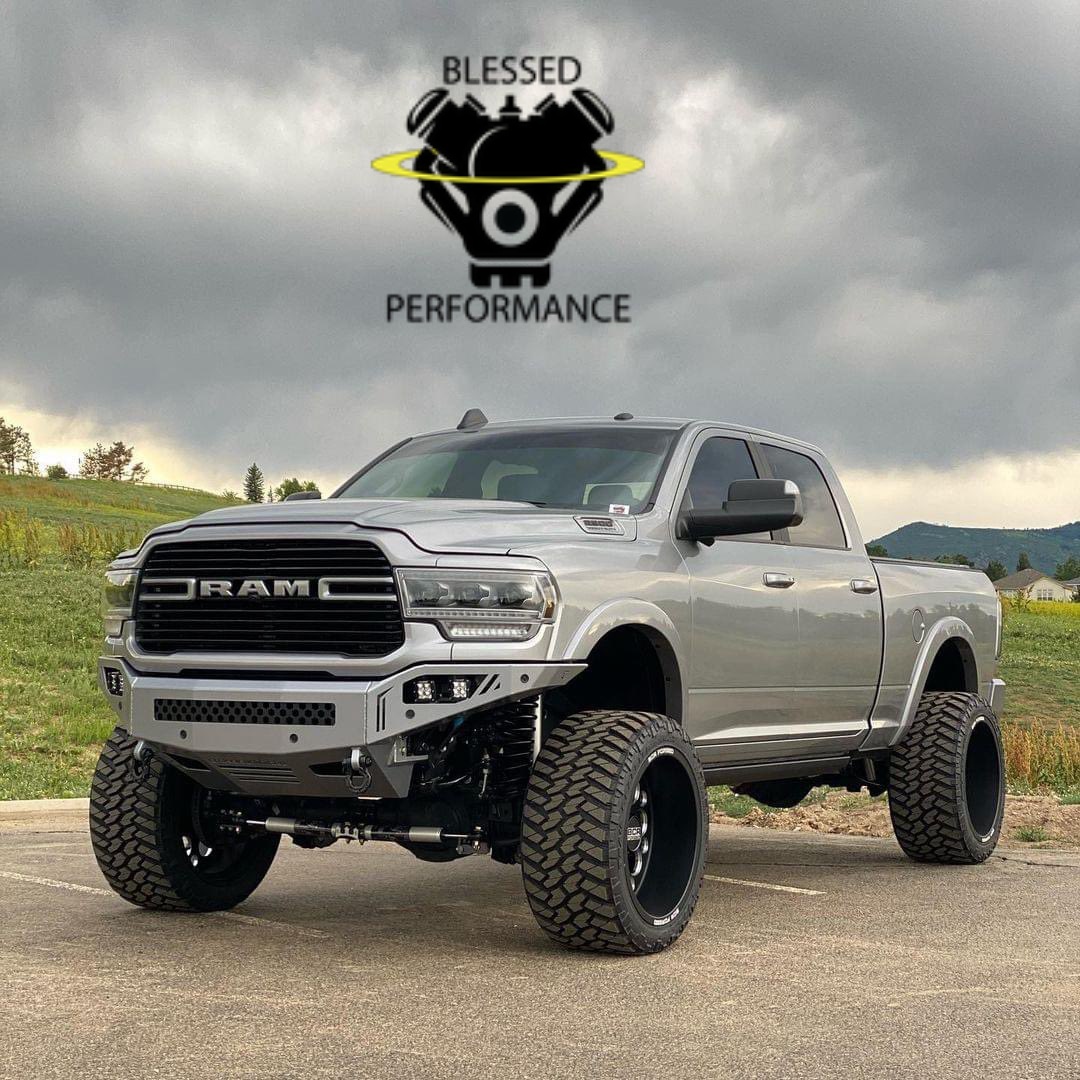 The 5.9 Cummins first appeared in Dodge trucks in 1989. It was initially manufactured in North Carolina and was known as the 5.9 6BT. An updated version of the 5.9, known as the 5.9 ISB continued to be used until 2007. It featured a straight six-cylinder configuration with a displacement of 359 cubic inches and is considered a large engine only to be six cylinders. Previous Dodge trucks had been available with a Mitsubishi diesel engine, but this option was not taken seriously and was seldom ordered by consumers.

Much like the 7.3 Powerstroke, the 5.9 Cummins was developed and updated over its production run with several notable changes, including all examples eventually using Bosch fuel management systems, and later ISB 5.9 engines would have four valves per cylinder instead of two. All 5.9 Cummings-powered Dodges featured a Holset turbocharger (Cummins own brand) for increased power and efficiency.

These engines initially produced around 230 Horsepower and about 440 ft-lbs of torque with an increase in power over its production run. One thing that set the 5.9 Cummins-powered Dodge Ram apart from the competition was the fact that it did not need glow plugs like most other diesel engines due to its direct injection system. The 5.9 Cummins has always been a popular engine choice and continues to have a following today even as technology continues to advance.

The most significant difference between these two engines is their cylinder count and configuration. Six inline cylinders in the Cummins versus eight cylinders in a V-shape found in the Powerstroke make for two visibly different engines. They are found in trucks manufactured by two rival companies who are fighting for market share and bragging rights, but they surprisingly do have a lot in common.

In original stock form, these two engines put out similar numbers when it comes to horsepower and torque. They both use the best turbocharging technology that was available at the time and are incredibly reliable. The biggest thing that the 5.9 Cummins and 7.3 Powerstroke have in common is that they are extremely easy to modify. These engines and the trucks they are found in are more popular than ever, and as technology has advanced, so have aftermarket performance parts that can increase horsepower, torque, and reliability.

The most important thing to keep in mind when repairing or modifying one of these engines is to use the best parts available. Installing cheap unreliable parts found on random internet websites can be a recipe for disaster. Not only can a cheap part cause your engine to fail and require an expensive repair bill, but it can also be a safety issue, and safety should always come first. 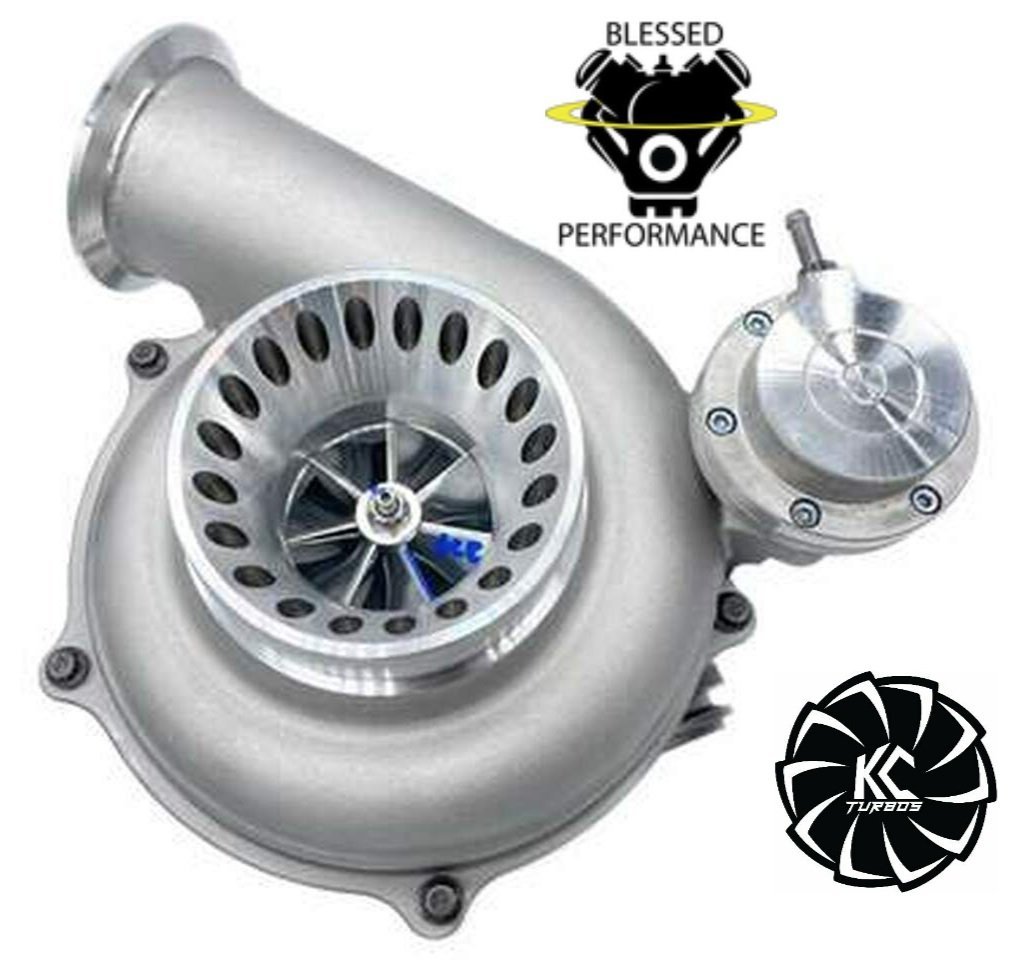 The good news is that any possible part that you might need to perform a 7.3 Powerstroke performance upgrade or a 5.9 Cummins performance upgrade can be found in our online store. The folks at Blessed Performance can get you set up with the parts you need to achieve the horsepower and torque gains that you want. Listed below are some of the most popular aftermarket upgrades available.

Turbochargers found on Powerstroke and Cummins engines are exposed to intense amounts of heat and stress, and they will wear out over time and eventually fail. Rebuild kits are available, but a professional amount of precision and skill is often required to ensure everything is perfectly balanced, so the best option is a replacement turbo. Blessed Performance has multiple bolt-on do-it-yourself turbo kits that can be installed by any knowledgeable and mechanically inclined truck owner. An upgraded turbo is a great way to increase horsepower, and you’ll have the added satisfaction that you installed the parts yourself.

Trucks featuring Powerstroke and Cummins engines are known for their distinct sounds, so it’s not surprising that another popular upgrade is a performance exhaust system. Blessed Performance has everything from complete exhaust systems to mufflers and installation hardware. Whether your original exhaust is rusty and needs to be replaced, or you are just looking for a few extra horsepower, you can’t go wrong with an upgraded exhaust system.

While both the 7.3 Powerstroke and 5.9 Cummings are incredibly reliable and long-lived, they will eventually need work. If you start taking off old worn-out parts, it makes sense to replace them with the best upgraded parts available. An engine rebuild is not something you can cut corners on, but luckily Blessed Performance has everything that you need to rebuild and upgrade your engine, including gaskets, seals, head studs, exhaust manifolds, cylinder heads, and any other part you could possibly think of.

If you are the proud owner of a truck that features a diesel engine, chances are you have been asked on multiple occasions, “Do you have a chip?” The people asking this question aren’t looking for a snack; they want to know if your engine management system has been tuned to provide the maximum amount of power without compromising reliability. Some mechanical upgrades will require an engine tune, and when it comes to tuning, Blessed Performance has the best options available, along with the knowledge to help you get the most out of your truck.

So which diesel engine is the best? Which is the most reliable? Which can be modified to produce to most power? Well, the answer is that there is no clear winner, It’s all a matter of personal preference. While visibly different, both of these power plants produce similar results, and both can be easily upgraded to meet your specific needs. If you own a truck powered by one of these engines and are looking for just a slight upgrade or are building a truck that will impress at the local drag strip, check out Blessed Performance.

The folks at Blessed Performance live and breathe diesel trucks. We carry the best high-quality parts available and offer everything from nuts and bolts to complete parts packages that are custom-tailored to your individual needs. We’re also a wealth of knowledge when it comes to what performance upgrades are needed to achieve the results you want. If you have any questions, give us a call or send us an email, get those parts installed on your 7.3 Powerstroke Ford or 5.9 Cummins Dodge, and decide for yourself who wins this battle of the Diesel Truck Titians!