The Snow Performance SNO-450 Stage 2 Boost Cooler Water-Meth Injection Kit is a universal kit that will allow you to add water-methanol to any diesel in your garage.  By lowering air temperatures over 200°F and helping with more complete combustion, this water-methanol kit adds horsepower while also lowering EGTs. This injection kit comes the VC-50 controller (52mm gauge) that has a 7 color (Red, White, Orange, Purple, Green, Blue, Yellow) OLED screen that you can customize to your preference while displaying boost, percentage of injection, secondary nozzle activation, prime button and 4 fault codes (Clogged Line/Broken Line/Pump Failure/Solenoid Failure) for peace of mind.
The Snow Performance SNO-450 Stage 2 Boost Cooler Water-Meth Injection Kit uses the VC-50 controller to control the two nozzles that injects water-methanol accurately in relation to boost pressure. Water-methanol that is injected in relation to boost allows precise delivery while offering added performance and lower EGTs across the entire RPM range. Start and full throttle injection stages are also adjustable so you can adjust the injection delivery to where it’s most useful in the RPM range. Included in this water-meth kit is a 7-gallon reservoir, anodized aluminum straps, mounting hardware, 300 PSI Ultra High Output pump, fittings, and either red nylon tubing with quick connects or -4AN braided stainless-steel line.

COMMON Q & A
What are the benefits of Water-Methanol injection?
Great HP per dollar value.
Decreases of 250 ° F are common using a 50/50% Water-Methanol mix.
More Horsepower while lowering EGTs makes this a great addition for hauling the heaviest loads.
Is this technology new with Turbo Diesels?
No. Water-methanol injection has been used extensively for years in as a common means of cooling the intake charge and reducing exhaust gas temps in high performance truck/tractor pullers. Also, truckers have used water injection for years to increase fuel mileage and lower EGTs.
Why methanol?
Methanol’s high latent heat of vaporization makes it an excellent air charge cooler which means a denser mixture and more horsepower. It is extremely toxic and should be handled with rubber gloves in well ventilated areas only. Care should be taken to avoid skin contact.
Where can I purchase Methanol?
Methanol can generally be purchased where racing fuels are sold. Also, most gas line dryers like "Heat" are simply Methanol. Suppliers of industrial chemicals can also supply Methanol usually at a higher price than fuel suppliers. If all else fails, most windshield washer fluids are up to 40% Methanol and 58% water.
Can I use windshield washer fluid?
Although most contain some glycol and detergent, most windshield washer fluids are up to 50% alcohol (methanol, ethanol, isopropanol) and make an excellent Boost Cooler. Try to find one that indicates "contains methanol".
What ratio of Water-Methanol is recommended?
A 50/50 ratio is recommended. Diesel applications where water conditions the combustion of the methanol so combustion timing isn't affected.
Will water-methanol harm my engine?
In theory, at recommended quantities, most of the mixture is evaporated before it hits the combustion chamber. Also, injection only takes place at high boost levels minimizing cylinder wash concerns. Engines that have been torn down after two years of water/methanol usage have shown no wear issues only clean combustion chambers.
Why is Water-Methanol injection so effective on Diesels?
Unlike gasoline engines, the power in a turbo diesel is largely a function of fuel. The problem with continually adding fuel is that you reach a point where the exhaust gas temperatures become prohibitive (over 1500 degrees F). A 50/50% Methanol/Water mix will decrease EGT's approximately 250°F while increasing power 70-100HP.
Not available for sale in the state of California 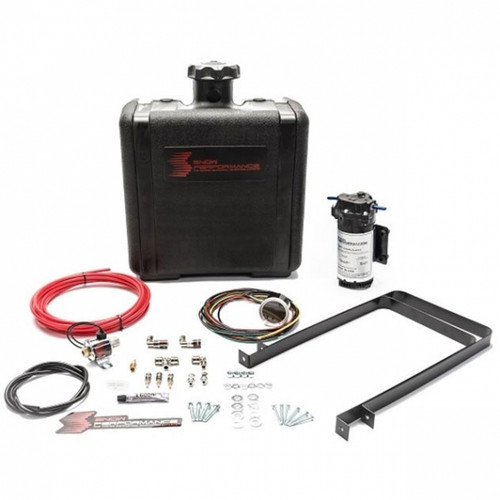